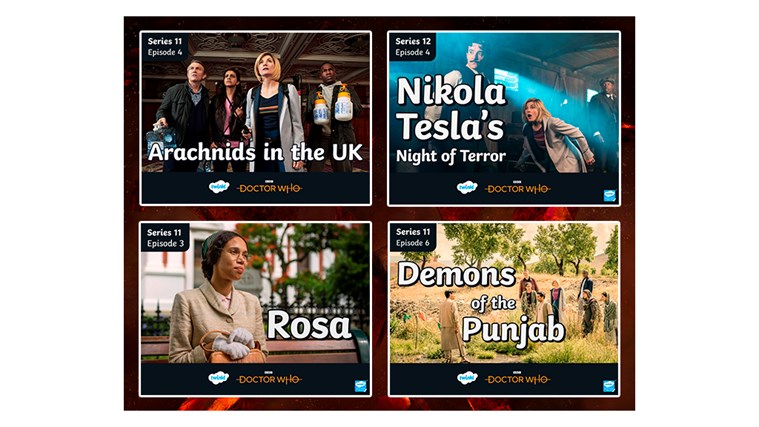 The resources bring together Doctor Who characters and stories with core subjects such as science, geography and history. The educational materials are free to use and accessible for everyone on Twinkl’s website.

The global educational publisher Twinkl has partnered with BBC Studios to create a ‘Dalek-table’ range of educational Doctor Who resources for children between seven and eleven years old.

Launching today, these are the first-ever Doctor Who educational resources to be linked to the UK national curriculums.

The resources include activity sheets, interactive presentations and reading comprehensions based around several episodes from series 11 and 12 of Doctor Who. These resources can be used separately or alongside episodes and link the Doctor’s adventures to units of study for school years three to six.

Covering core subjects including science, geography and history, the materials introduce children to figures such as Rosa Parks, Nikola Tesla and Thomas Edison, and teach them about subjects such as the Indian partition, artificial intelligence and animals and their ecosystems. Children are also encouraged to explore the different uses of electricity and the many forms it takes, as well as how to remain safe when using electrical equipment around the home.

Free to use and accessible to everyone, the resources can be downloaded through the Twinkl website and are a valuable teaching tool for teachers, parents and carers.

Twinkl’s mission is to help those who teach and the company offers over 640,000 teaching and learning materials on its website, which are all teacher created and checked. The company has recently created a bespoke Home Learning Hub, full of daily activities and materials, to support parents, teachers and carers with home learning.

Vanessa Hamilton, Head of Brand, Doctor Who, BBC Studios, said: “We’re delighted to be partnering with Twinkl to create Doctor Who educational resources for children across the world. Doctor Who has been inspiring and entertaining children for generations, so we’re thrilled that we can bring this much loved series to the classroom in an educational and engaging way.”

Jonathan Seaton, CEO and Co-Founder, Twinkl, said: “Working with BBC Studios to create this exciting range of Doctor Who learning materials has been out of this world! We are always looking for new ways to help those who teach, and hope that these resources provide teachers, parents and carers with a unique new way to engage children in learning.

“We know that now more than ever parents are looking for ways to help children learn at home and hope that the Doctor Who resources will be a big hit in households and at schools right now, as well as far into the future.

These resources can be downloaded from www.twinkl.co.uk/doctorwho

Twinkl was founded in 2010 in Sheffield by husband and wife Jonathan and Susie Seaton, with a mission ‘to help those who teach’.

The company provides high quality, online learning materials and services, which are all teacher-created and checked.

Twinkl offers over 640,000 resources, with new content added daily. This ranges from schemes of work and assessments to augmented reality games and much more.

Twinkl is used and trusted by schools and educators in over 200 countries and dependencies, including primary and secondary school teachers, nursery workers and parents.

The company now has over 570 team members based across the world and at its offices in Sheffield and Australia.

More information can be found at twinkl.co.uk

The idea for Twinkl came to Jonathan and Susie Seaton when Susie was working as an Early Years teacher and couldn’t find the materials she needed for her lessons online. As a result, Susie was working evenings and weekends to make resources from scratch.

Speaking to colleagues and friends, the couple found that Susie was not alone in her situation. So, to help other teachers, they began creating and publishing educational resources online from their spare bedroom.

The business grew quickly and organically as educators embraced the high-quality materials. The team grew quickly too, with current and former teachers, as well as experts in content and design soon joining Jonathan and Susie in their mission 'to help those who teach.'

Jonathan and Susie are delighted that Twinkl is now taking this mission across the world, returning time and energy to educators that is better spent in the classroom with their pupils or on themselves at home.

Doctor Who is one of the longest running action adventure television series in the world spanning 56 years and winning over 100 awards. This quintessentially British show has a huge global following, with 9.6m fans across social platforms/channels and 100m video views on YouTube in the last year alone. It was the most tweeted about drama programme brand in the UK throughout 2018. Doctor Who is sold to over 249 territories. Series 11 achieved the 2nd biggest UK drama launch of 2018 and the 3rd most watched Doctor Who series since its return in 2005. It outperformed channel averages internationally and delivered double digit series on series increases in the US and Canada. It has been honoured by Guinness World Records as the longest running science-fiction series in the world. Doctor Who has a proven track-record in consumer products and live entertainment with over four and a half million Sonic Screwdrivers sold in the past eleven years, over 13 million action figures sold since 2005, over 19 million DVDs sold globally and over one million tickets sold for live events.

BBC Studios, a global content company with British creativity at its heart, is a commercial subsidiary of the BBC Group. Formed in April 2018 by the merger of BBC Worldwide and BBC Studios, it spans content financing, development, production, sales, branded services and ancillaries. BBC Studios’ award-winning British programmes are internationally recognised across a broad range of genres and specialisms. It has offices in 22 markets globally, including seven production bases in the UK and production bases and partnerships in a further nine countries around the world. The company, which makes 2500 hours of content a year, is a champion for British creativity around the world and a committed partner for the UK’s independent sector. BBC Studios has revenue of £1.4bn, and returns around £200m to the BBC Group annually, complementing the BBC’s licence fee and enhancing programmes for UK audiences.