Daleks! to launch in November this year as part of Doctor Who Time Lord Victorious 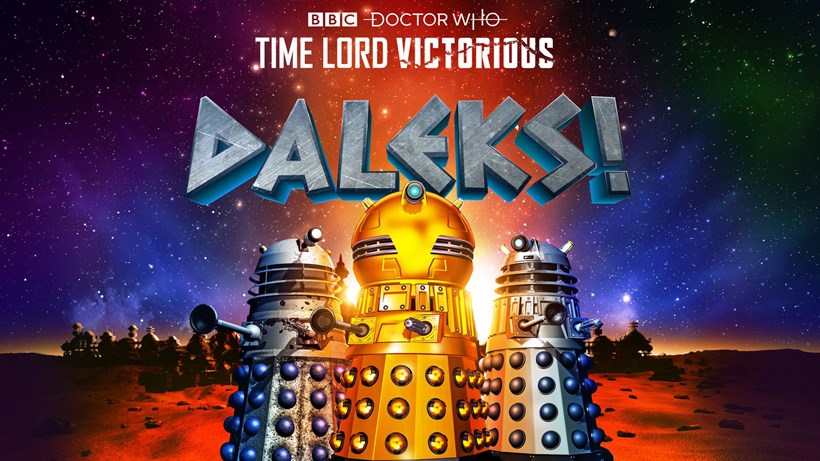 Nicholas Briggs, Joe Sugg, Anjli Mohindra and Ayesha Antoine feature in CGI animation series which forms part of the hotly anticipated multi-platform story.
BBC Studios have announced the final, missing piece in Doctor Who Time Lord Victorious with a five-part CGI animation launching in November this year. Daleks! will be available for fans to watch for free, weekly on the Doctor Who YouTube channel.
Daleks! is a 5x10 min animation and will feature a star-studded voiceover cast with Nicholas Briggs (voice of the Daleks in Doctor Who) Joe Sugg (YouTube, Strictly Come Dancing), Anjli Mohindra (Bodyguard, The Sarah Jane Adventure) and Ayesha Antoine (Holby City).
Nicholas Briggs said: “This latest, fantastic, thrill-packed venture into the world of animation, with the Daleks as the stars of the show, is something so many of us have been craving for years. And for me it’s been a marvellous challenge, as usual playing every single Dalek in action, but with the added excitement of portraying some beautifully written, leading Dalek characters. It’s been a blast, and I can’t wait to see the finished production.’
Joe Sugg said: “I’m super excited and thankful to have been invited to play a role in this new animation. I’ve been a fan of Doctor Who from a young age so to be a part of it is a dream come true.”
Anjli Mohindra said: “When I saw that this series was about THOSE iconic villains I knew it was going to be one hell of a ride and I couldn’t wait to sign up!! I had so much fun being thrown into the wonderfully weird world of remote recording and so thrilled that I was able to be part of something that feel so special!”
Ayesha Antoine said: “I have never been more fascinated to see the final product of a show. To be a part of the animated story of these iconic baddies is really special. The recording session was a whole new adventure - another surreal moment to add to the growing list from 2020”.
Written by James Goss and created by Salford-based animators Studio Liddell, Daleks! is a BBC Studios Digital production.
Time Lord Victorious officially launched earlier this month, with products and experiences dropping every week until early 2021. The multi-platform story brings together eleven partners across ten platforms for the first time ever to tell a brand new Doctor Who adventure for fans across the world. Fans can enjoy as much or as little of the adventure as they choose, exploring the animation as well as novels, magazines, comics, escape rooms, audios, games, immersive theatre, vinyl, figurines and t-shirts.

More information about Daleks! will be announced soon. Details about Time Lord Victorious along with a full timeline of product launches can be found on the Time Lord Victorious website: www.doctorwho.tv/time-lord-victorious/
NOTES TO EDITORS
About Doctor Who
Doctor Who is one of the longest running action adventure television series in the world spanning 55 years and winning over 100 awards. This quintessentially British show has a huge global following, with 9.6m fans across social platforms/channels and 100m video views on YouTube in the last year alone. It has been honoured by Guinness World Records as the longest running science-fiction series in the world. Doctor Who has a proven track-record in consumer products and live entertainment with over four and a half million Sonic Screwdrivers sold in the past eleven years, over 13 million action figures sold since 2005, over 19 million DVDs sold globally and over one million tickets sold for live events.
Doctor Who logo and insignia © 2018 and TM BBC. Licensed by BBC Studios.
About BBC Studios
BBC Studios, a global content company with British creativity at its heart, is a commercial subsidiary of the BBC Group. Formed in April 2018 by the merger of BBC Worldwide and BBC Studios, it spans content financing, development, production, sales, branded services and ancillaries. BBC Studios’ award-winning British programmes are internationally recognised across a broad range of genres and specialisms. It has offices in 22 markets globally, including six production bases in the UK and production bases and partnerships in a further nine countries around the world. The company, which makes 2500 hours of content a year, is a champion for British creativity around the world and a committed partner for the UK’s independent sector. BBC Studios has revenue of £1.4bn, and returns around £200m to the BBC Group annually, complementing the BBC’s licence fee and enhancing programmes for UK audiences.