BBC Studios announce Doctor Who: Galaxy 4 Animation, due for release on 15th November 2021 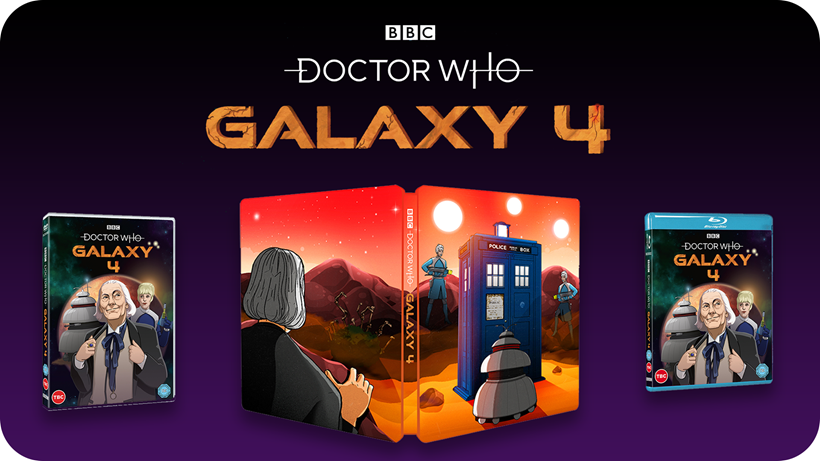 BBC Studios have announced the new Doctor Who: Galaxy 4 animation starring William Hartnell as the Doctor and can reveal artwork alongside a sneak peak of what’s included in the release. The new animated release will be available online and in store on DVD, Blu-ray and a Limited Edition Blu-ray Steelbook, available to pre-order now from HMV, Amazon, Zavvi and Rarewaves.

Galaxy 4 (alternatively spelled Galaxy Four) is the mostly-missing first serial of the third season of the British series Doctor Who, which originally aired in four weekly episodes from 11th September to 2nd October 1965.

Following the success of the existing animations, Galaxy 4 fills another gap in the missing Doctor Who content lost from the BBC’s archive soon after the programme’s original transmission. However, audio-only recordings of all four episodes have survived and have been used here to create a brand new fully animated presentation of the entirety of this lost classic, alongside the original surviving Episode 3 and over five minutes of original footage from the otherwise lost Episode 1.

The Doctor (William Hartnell) stars alongside his travel companions Vicki (Maureen O'Brien) and Steven (Peter Purves) which sees the TARDIS landing on a planet on the verge of total annihilation as it drifts too close to the three suns which it orbits. Trapped on the planet with them are the Drahvins, a race of warrior women, and the reptilian Rills. The Drahvins want to steal the Rill spaceship to escape the planet's death throes, and enlist the Doctor's help, which he is forced to give when Maaga, the cunning Drahvin leader, keeps first Vicki and then later Steven as her hostage.  Even though the Doctor is determined to broker a peace deal between the two sides in this conflict and help everyone escape safely, Maaga doesn't trust him, or the Rills...

The two disc release gives fans the opportunity to enjoy the four new animated episodes of Galaxy 4, in either colour or black and white. The release will also include:

Gary Russell, Executive Producer from Big Finish Creative of the 2021 production said “After a gap of many years, it is very exciting to bring the era of the First Doctor back into the animation world. Galaxy 4 is one of the most traditional adventures of 1960s Doctor Who and it’s been a real honour to work on this alternative version which hopefully reflects those technicolour thrills that sci-fi moves of the '60s had but which Doctor Who’s monochrome TV limitations couldn’t yet achieve.”

BFI Southbank will host a special screening of all 4 episodes of the newly animated story Galaxy 4 on 7th November 2021; tickets go on sale on 16th September at 11:30 to BFI Champions and Patrons, at 12:30 to BFI Members and at 16:00 to the general public.

BBC Studios, a global content company with bold British creativity at its heart, is a commercial subsidiary of the BBC Group, supporting the licence fee and enhancing programmes for UK audiences. Able to take an idea seamlessly from thought to screen and beyond, its activities span content financing, development, production, sales, branded services, and ancillaries across both its own productions, and programmes and formats made by high-quality UK independents. Award-winning British programmes made by the business are internationally recognised across a broad range of genres and specialisms, with brands like Strictly Come Dancing/Dancing with the Stars, Top Gear, Doctor Who and Bluey. BBC Studios has offices in over 20 markets globally, including ten production bases in the UK and production bases or partnerships in a further seven countries around the world. The company, which ordinarily makes around 2000 hours of content a year for both the BBC and third parties including Apple, Netflix and Migu, is a champion for British creativity around the world.  It is also a committed partner for the UK’s independent sector through a mix of equity partnerships, content investment and international distribution for programme titles.

Doctor Who is one of the longest running action adventure television series in the world spanning 57 years and winning over 100 awards. This quintessentially British show has a huge global following, with 9.6m fans across social platforms/channels and 100m video views on YouTube in the last year alone. It has been honoured by Guinness World Records as the longest running science-fiction series in the world. Doctor Who has a proven track-record in consumer products and live entertainment with over four and a half million Sonic Screwdrivers sold in the past eleven years, over 13 million action figures sold since 2005, over 19 million DVDs sold globally and over one million tickets sold for live events.