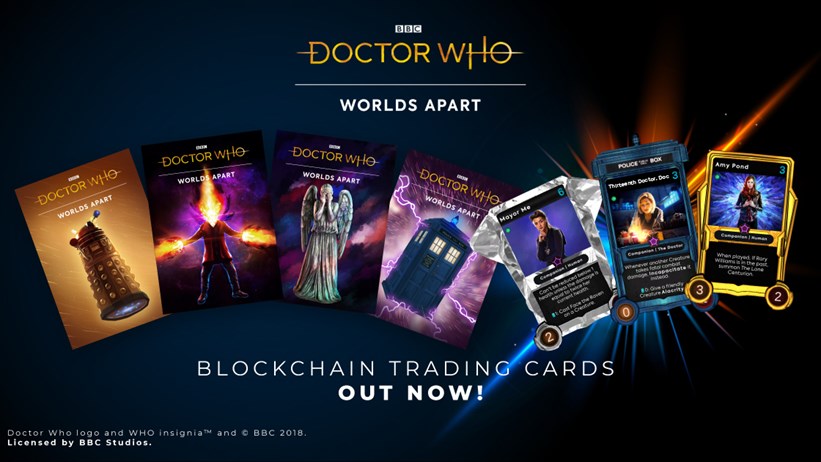 Collect characters from across the Doctor Who universe and trade with other fans, go head-to-head with friends in turn-based contests as part of the Doctor Who: Worlds Apart PC game.

Fans can now collect digital versions of their favourite Doctor Who characters for the very first time, in the form of Doctor Who: Worlds Apart trading cards. Digital card packs are available to buy from today on the Doctor Who Worlds Apart website.

This must-have collection from BBC Studios and Reality Gaming Group includes over 200 digital trading cards based on characters, scenes and objects drawn from the entire 57-year history of Doctor Who.

There are four different packs for fans to purchase, each containing between five and ten limited-edition cards with beautifully hand drawn images. Fans can also collect 13 different cosmetic card frames.

Each card is secured and protected on the blockchain, which means there can be no copies or disputes about ownership.

From next year collectors will be able use their cards to go head-to-head with friends in turn-based contests in the Doctor Who: Worlds Apart card game, a free-to-play tactical card game which will be released for PC in 2021.

The game will be action-packed, with battles fought on digital tabletop boards depicting recognisable locations from Doctor Who. Collectors will play a Time Lord, strategically outsmarting their opponents by building decks that are able to combat a wide variety of tactics.

Morten Rongaard, Co-Founder of Reality Gaming Group, said: “We are tremendously excited to be working with BBC Studios to bring Doctor Who’s huge global community an exciting new digital experience based on a pastime we all know and love – trading cards. The cards used in Doctor Who: Worlds Apart are both functional and collectible, so fans can actually own a piece of the game while they play.”

John Kavanagh, Licensing Manager, Gaming and Interactive, BBC Studios, said: “We’ve worked closely with Reality Gaming Group to deliver a fantastic opportunity to collect and own these beautiful cards and use them in a unique game experience.”

The digital card packs are available to buy now from $4.99 RRP on the Doctor Who: Worlds Apart website at https://doctorwho-worldsapart.com.

Reality Gaming Group is a developer and publisher that creates new games experiences and collectibles utilising blockchain technology. The games publishing division, Reality Studios works with well-known brands as well creating its own IP, including award winning mobile game Reality Clash. It is also the creator of DAT, a Digital Asset Trading platform that can turn your brand and IP into digital collectibles and log them on the blockchain, known as NFTs, where they can be traded, sold, displayed or used in games. http://realitygaminggroup.com

Doctor Who is one of the longest running action adventure television series in the world spanning 57 years and winning over 100 awards. This quintessentially British show has a huge global following, with 9.6m fans across social platforms/channels and 100m video views on YouTube in the last year alone. It has been honoured by Guinness World Records as the longest running science-fiction series in the world. Doctor Who has a proven track-record in consumer products and live entertainment with over four and a half million Sonic Screwdrivers sold in the past eleven years, over 13 million action figures sold since 2005, over 19 million DVDs sold globally and over one million tickets sold for live events.